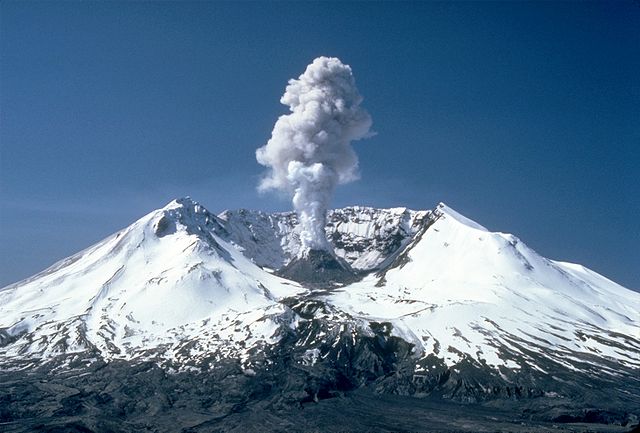 Mount St. Helens is most famous for its catastrophic eruption in 1980. The active volcano is located in Washington State, about 90 miles south of Seattle and 50 miles northeast of Portland, Oregon. The Mount St. Helens recreational area was re-opened in 1987.

The Mount St. Helens eruption of 1980 was the deadliest and most economically
destructive volcanic event in United States history. A series of small earthquakes were detected starting on May 16, 1980. Two days later, at 8:32 on a Sunday morning, a massive earthquake measuring 5.1 on the Richter scale violently shook Mount St. Helens.

The volcano violently erupted, its north face exploded, and lava poured fourth for nine continuous hours. Minor explosive activity would continue for six years. More than 1,300 feet of the mountain’s rocky summit were blown away, leaving a mile-
wide crater. The lava – which was 1300 degrees Fahrenheit — incinerated the surrounding forest and campsites, killing fifty-seven people and 7,000 large wild animals. It also destroyed more than $1 billion in property. The lava coated 185 miles of highway and 230 square miles of forest. It incinerated 250 homes, dozens of bridges, and 15 miles of railways.

In addition to the lava damage, the area surrounding Mount St. Helens suffered a massive avalanche of mountain debris. Within fifteen seconds of the largest explosion, ash clouds had formed fifteen miles up in the atmosphere. Ash was carried by wind throughout eastern Washington. Two hundred and fifty miles away, residents of Spokane said that daytime was as dark as night. After President Jimmy Carter surveyed the damage, he commented, “Someone said this area looked like a moonscape. But the moon looks more like a golf course compared to what’s up there.”
Archaeological evidence suggests that many civilizations may have been impacted by Mount St. Helens’ eruptions. Campsites at least 6,500 years old have been discovered in the mountain vicinity. About four thousand years ago, aboriginal settlements were buried in pumice. People seem to have abandoned the land for two thousand years, after which hunters and gatherers returned for seasonal collection of food. These included members of the Upper Chinook, Cowlitz, Klickitat, Taidnapam, and Yakama tribes. The tribes developed many legends to explain the historic catastrophe and intermittent volcanic activity.

Europeans may have first spotted the volcano in 1792 when the British Royal Navy
Commander George Vancouver and his officers surveyed the Pacific Northwest coast.
Vancouver named the mountain St. Helens in honor of a British diplomat, an Alleyne
Fitzherbert, First Baron St. Helens. Geologists later determined that starting in 1800, the Goat Rocks area started erupting for 57 years!

Fur traders and missionaries started to settle the area around 1840. Starting in the wintry days of 1842, they reported a “Great Eruption”. This produced ash clouds and was followed by 15 years of small-scale steam-and-ash explosions.

By 1980, Mount St. Helens did not seem as threatening. The nearby Spirit Lake offered recreational activities year-round, and the region was a popular boating, camping, and skiing destination. During the 1980 eruption, the lake was dramatically uplifted. Thousands of trees were uprooted and the lake sloshed water 800 feet upward. Once Spirit Lake settled again, it was smaller and much shallower than before. The lake was devoid of life, as volcanic gases removed all its oxygen.

The Mount St. Helens area was left to naturally recover. It has gradually changed from gray to green. Some areas are thriving with new coniferous forests, and even the areas coated with volcanic rock have seen vegetation emerge. By 1993, scientists reported seeing fish in the once uninhabitable Spirit Lake. Barring another explosion, by the year 2200 the forest may look as it did before the 1980 catastrophe.

President Ronald Reagan and the US Congress established the Mount St. Helens National Volcanic Monument in 1982. The park was reopened in 1987 and has only closed briefly, though seismic activity is still evident. People can access visitor centers on the west side of the mountain via State Road 504. Mountain climbing is permitted, and people can even dare a climb to the new crater of Mount St. Helens.