Newport Castle is now no more than a ruin in the city of Newport, South Wales. It is the castle that gives Newport its name in Welsh, Casnewydd (”New Castle”). The ”new” is a reference to the ”old” Roman fortress in nearby Caerleon.

The castle has been practically forced out of existence due to the demands of traffic and the ever-present threat of the River Usk. Only the east side of the castle remains, sandwiched between a busy road and roundabout, and the tidal river. The ruins of the castle were permanently fenced off in 2003, followed by the closure of the public footpath in 2006. 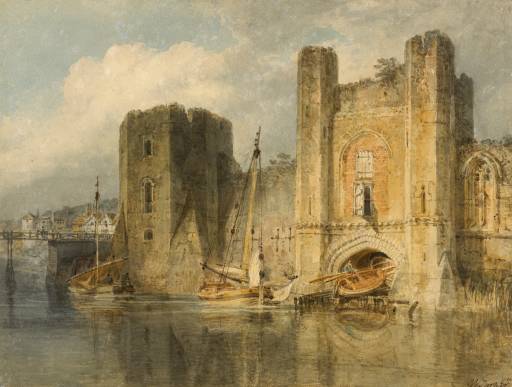 The best view of the castle is from the ”front” on the roadside, but rather from Newport Bridge or the neighbouring railway bridge, where its position right on the bank of the River Usk can be appreciated. The projecting central tower with its water-gate or dock beneath its dominant feature. Flanking it are two octagonal towers with prominent spur buttresses. These mark the north and south end of the castle. from which a curtain wall ran westwards enclosing a roughly rectangular area. Outside the curtains was a deep moat which filled with sea water at high tide.

Newport Castle had a active life of just 200 years and was involved in political situations. it served more as an administrative base for the lordship of Wentlog. Today the castle similarly pales into insignificance. It is not technically a tourist attraction and so can only be vaguely appreciated by passers-by or seen from people travelling into Newport on a Train or by cars on the Newport Bridge.

Historians believe that Newport Castle was built between 1327 and 1386 by Hugh d”Audele, or his son-in-law Ralph, Earl of Stafford. It replaced the earlier bailey castle on Stow Hill (near St.Woolos Cathedral), which had been destroyed in battle. The newer castle, which possessing a strong structure, was never needed for military purposes.