Walnut Tree Viaduct was a railway viaduct located above the southern edge of the village of Taffs Well, South Wales. Originally built to carry the Barry Railway across a narrow gorge through which the River Taff, Taff Vale Railway and Cardiff Railway passed, it was deconstructed in 1969, leaving only two of the support columns visible from the A470 road.

During the Industrial Revolution, and the mass-extraction of coal from South Wales, there was a resultant growth in construction of railways into the South Wales Coalfield. The Taff Vale Railway so monopolised the trade of shipping coal to Cardiff Docks, that mine owners were desperate for competitor railway companies to both improve speeds of shipping, provide access to new markets, and hence reduce shipping rates.

However, by 1880 the TVR and RVR were so congested with coal traffic, that a group of coal mine owners, iron makers and industrialists led by David Davies of Ocean Collieries, who had all suffered from the capacity and monopoly issues created by two companies:

In light of the geographic restrictions of the valley south of Pontypridd, Davies proposed development of a secondary route which terminated at Barry, where a dock infrastructure could be developed without the mud flat or tidal restrictions which gave Cardiff’s Tiger Bay its name. This would create a competitive edge to the development, and due to being later developed to a more easily accessible docks, a resultant efficiency advantage over Cardiff.
The Barry Dock and Railway Bill was introduced in the 1883 Parliamentary session but was defeated by opposition, particularly from the Bute Docks and Taff Vale Railway. The Bill was introduced again the following year and the Barry Dock and Railway Company Act was passed on 14 August 1884 for the construction of a dock between Barry and Barry Island. The name was changed to the Barry Railway Company by an Act of 5 August 1891.

By 1889 the mainline of the BRC connected Barry Docks to Trehafod railway station, within the Rhondda Valley. However, Davis wanted access to the Rhymney Valley and the industrial hub of Dowlais at Merthyr Tydfil, so proposed a direct branch line from Cadoxton to Llanbradach.

Having already engineered the mainline of the BRC, Chief Engineer Sir James Szlumper proposed that the new Llanbradach branch run from the BRC mainline at Tynycaeau Junction near St Fagans, direct to the a junction with the Brecon and Merthyr Railway (BMR) at Llanbradach first known as Barry Junction (BMR) and later, Duffryn Isaf Junction. There would be no stations, allowing the freight trains to run unimpeded at full speed, and hence maximising traffic revenue.

After passing through the Garth Hill via the Walnut Tree Tunnel (490 yards (450 m)), a siding served Dolomite Quarry, before the line crossed the River Taff valley via the congested geographical squeeze-point just north of Radyr, known as Walnut Tree. The height and form of the viaduct at this point not only needed to cope with the congested valley bottom, crossing the River Taff, but also at its western end, curve onto a shelf of rock on the eastern hillside. The railway then connected to the RR via Penrhos Lower Junction, allowing access to Caerphilly.

The BRC Llanbradach branch continued along the eastern side of the Taff valley, to then span the RR and the TVR via the Penrhos Viaduct, and then the Penyrheol Viaduct. Finally the line circumvented west side of the town of Caerphilly, and crossed the Rhymney valley north of Energlyn by means of the Llanbradach Viaduct, near Pwll-y-pant, constructed to ease the gradient onto the BMR junction south of Maesycwmmer. The section from Penrhos lower Junction to the Brecon & Merthyr junction was known as the B&M Extension.

Facing similar problems to those that Chief Engineer Charles Liddell with the Taff Vale Extension of the Newport, Abergavenny and Hereford Railway (NA&HR) had at the Crumlin Viaduct in spanning the Ebbw River, Szlumper surveyed the earlier structure and came to the same conclusions:

That the necessary height, created both a structural problem and a wind problem, as the valley funnelled and hence increased wind speed.

That a lack of suitable local resources meant that shipping in materials was the only option. That a stone structure would result in an unstable and high-maintenance bridge, the thick structure of which would create additional compressed wind flow around the rail tracks, resulting in a possible safety hazard for passengers and train crew.

His recommendation therefore like Liddell to the board of the BRC was for steel lattice girders spans, set atop brick-built supporting columns. The final structure, which took less than 12 months to build, opened in 1901. At its maximum 120 feet (37 m) high, the seven spans created a structure of 1,548 feet (472 m) long, which curved slightly at its western end to enable the line to bend onto the rock shelf.

The Llanbradach branch (or B&M Extension) enjoyed a short but productive life north of Penrhos Lower Junction as it was de-commissioned by the later owning Great Western Railway in the early 1930s, with all three viaducts on that section removed and sold for scrap by the end of 1937. Today, all that remains is a single brick arch towards the western end of where the Llanbradach Viaduct was sited. A short section of track bed remains near Energlyn, while the rest of the trackbed was incorporated into the A468 road Caerphilly bypass.

Later renamed the ‘Penrhos Branch’ by the GWR, post-nationalisation it came under the control of British Railways. On 31 March 1963, a fire destroyed Tynycaeau Junction signal box and BR decided not to rebuild it, and hence the Penrhos Branch section from the Walnut Tree tunnel southwards to Tynycaeau junction was maintained as its original double track but given ‘long siding’ status and as Steetley Doloma workings had always necessitated a run-round by the steam locomotive, which could not be performed at the Walnut Tree West rail connection due to the permanent way layout, the loco’ had to travel ‘light engine’ for a round trip of 7¼ miles by running to Tynycaeau and crossing over from down to up line near the former junction with the Cadoxton-Wenvoe-Pontypridd line. With the signal box out of action at Tynycaeau, the crossover was modified to sprung points from down to up line. Eventually even that section was curtailed and sleeper stops placed on both lines at the Walnut Tree tunnel north portal. The double track was not lifted until the decommissioning of the whole line in 1969. The remaining branch was later worked as a single-track long siding from Penrhos to the Steetley Doloma limestone quarry, just south of the viaduct, the permanent way layout having been modified. The last train to the quarry ran over the viaduct in 1967. By the late 1990s the tunnel was gated and by the year 2000 the quarry had breached the tunnel lining, leaving a 50 yards (46 m) air gap in its structure. 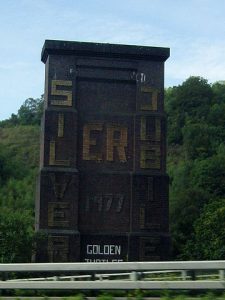 After Welsh Office and Cardiff Council approved the dual carriageway improvement to the A470 road, British Railways agreed to close the remaining line, with two of the Walnut Tree Viaduct brick pillars in direct alignment of the road improvement. After dominating the southern end of Taffs Well for nearly 70 years, contractors started demolition of the Walnut Tree Viaduct in 1969. Delayed by the need to demolish all but one of the piers and one pillar by hand due to the congested valley bottom, by 1974 they had finished their work.

Only the Walnut Tree tunnel abutment, an angled pillar and Taff Bank pier remain, all visible from the village and the A470. The Taff Bank pier was used in 1977 for displaying goodwill messages for the Silver Jubilee of Elizabeth II, with the paint still visible today. Parts of the remaining track bed are now incorporated into the Taff Trail.