Victoria Pier is a Grade II listed pier in the seaside resort of Colwyn Bay. Designed by Maynall and Littlewoods the pier opened in 1900 and was extended in 1903 to the length of 227m. The first two pavilions built on the pier burnt down along with a bijou theatre. The third pavilion was built in 1934 and significantly extended and altered in the 1970s to allow for nightclub and amusement arcade entertainments. From the late 1980s the pier began to decline with the seaward portion of the pier being closed due to its poor state of repair. The condition of the pier and the entertainments continued to decline until 2008 when it closed permanently. A long-standing legal wrangle between the previous private owner and the council ensued. By 2013 the pier was in danger of collapse and a local community group attempted to secure funding for a rebuilding program which failed. In 2017 part of the pier collapsed onto the beach below, dangerous sections of the pier were dismantled and a new plan to create a shortened pier were agreed upon by the council and a charitable trust representing the community interest. 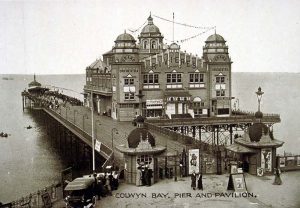 Designed by Maynall & Littlewoods of Manchester, Colwyn Bay’s Victoria Pier was one of the later British piers to be built, with construction starting in June 1899 by the Salford firm of William Brown & Sons. Its official opening was on 1 June 1900, when the architect, Mr. Littlewood, handed a golden key to the pier’s owners. As first constructed, the pier was just 316 ft (96m) long and 40 ft (12m) wide, comprising a timber promenade deck with seating and railings along its length, and a 2,500 seat pavilion in the Moorish Revival style. The pavilion was set to the right of the deck, with a walkway allowing access to the pier-head to the left. The pavilion’s main entrance was flanked on one side by a flower shop and, on the other, by a coffee lounge and cake shop. Inside, the pavilion boasted a large balcony which extended around three sides of the auditorium and a full orchestra pit. In 1903, the Victoria Pier Company decided to extend the neck to a length of 750 ft (227m) to facilitate outdoor theatrical performances.

A 600-seat ‘Bijou’ theatre was built at the pier head in 1917 for the purposes of light entertainment. The first Pavilion building was completely destroyed by fire in 1922. The Victoria Pier company suffered serious financial difficulties after the fire. As a result, Colwyn Bay Urban District Council purchased the pier and work began immediately to rebuild the pavilion. In July 1923 the second pavilion was opened, at a cost of £45,000. Unfortunately, disaster struck again on 16 May 1933, when the second pavilion was destroyed by fire, followed on 28 July 1933 by a fire that destroyed the Bijou theatre.

Colwyn Bay Urban District Council set about rebuilding, and the third pavilion was opened on Tuesday 8 May 1934 at a cost of £16,000, but the Bijou theatre was never rebuilt. Increasing usage of the pier led the council to introduce a twopenny toll (free after 6pm) in 1936, which included the price of a deckchair and listening to the band. The purpose of the toll, said the council, was to prevent ‘indiscriminate lounging on the pier’. In the pavilion, Ernest Binns presented ‘The Colwyn Follies’, with seats at two shillings, one shilling and sixpence. During the 1950s and 60s, the pier began a period of gentle decline. In 1953, the pavilion’s tearoom, which had been a year-round meeting place for 40 years, started closing for the Winter. In 1956, the line up of entertainment in the pavilion was as follows: Monday: Bingo, Tuesday: Wrestling, Wednesday: Amateur Talent Show, Thursday: Old Time Dancing, Friday: Popular Dance, Saturday: Young People’s dance. 1958 saw the end of the Summer variety shows in the pavilion. In 1959, the variety shows were replaced by a small orchestra of six musicians; over 20,000 people paid 9 pence each that year to attend the afternoon concerts, with another 10,000 attending in the evenings. By 1961, falling audiences forced the council to reduce the orchestra to three musicians. 1962 saw the council admit defeat for live performances and install pre-recorded orchestral music.

In 1968, ownership of the pier passed from the local council to Entam Leisure, a division of Trust House Forte, for just £59,000. Entam Leisure decided that the pier needed modernisation to prosper. This involved building the Golden Goose Amusements in a large new modern building on the pier neck, the opening of the Golden Fry Restaurant in the old tearooms, and the conversion of the pavilion into the Dixieland Showbar. As part of this work, the ornate Moorish toll booths at the entrance to the pier were removed to create an open aspect to the pier entrance. During the 1970s, the Dixieland Showbar hosted many live concerts, featuring groups/acts such as Motorhead, The Damned, Siouxie & The Banshees, Elvis Costello, Slade, Budgie, The Specials, Jackie Wilson, Madness, Cockney Rejects and Blondie. In 1979, the pier was sold again, this time to Rhyl-based leisure operators, Parkers Leisure (Holdings) Ltd. They converted the Dixieland Showbar into CJ’s Nightclub and built an extension onto the front of the Golden Goose Amusements, to create a larger entrance/amusements area.

1987 saw the entire seaward end of the pier being closed to the general public, on grounds of safety. In 1991, Parkers Leisure closed down their amusement and disco businesses on the pier. Vandals attacked the pier after the closure, smashed most of the windows in the former Golden Goose Amusements, and broke into the pavilion to set fire to it. In 1993, Colwyn Borough Council gave permission to demolish the pavilion and seaward end of the pier, but the work was never carried out. August 1994 saw new hope for the beleaguered pier, as marine engineer Mike Paxman bought it and stated he intended to restore it to its former glory. Paxman carried out work to repair the pier’s decking and subdivided the former Golden Goose Amusements building into several smaller business, including a bar, cafe, shops and amusements, which opened on 1 April 1996. He also intended to reopen the pavilion as a nightclub but did not have sufficient funding to do so. He eventually put the pier up for sale in 2003 by advertising it on auction site eBay but it failed to sell. On 11 December 2003 the pier was bought by Cambridgeshire businessman Steve Hunt, who sold his house to fund the £100,000 purchase price. He reopened the pier on Saturday 17 January 2004 and announced his intention to gradually restore the decaying structure. He has a particular interest in restoring the pier’s Art Deco Pavilion, built in 1933. In 2008, the entrance building housed a fishing tackle shop, cafe, bar (which was extended, refurbished and renamed ‘Oddities’ for the 2008 season) and a selection of amusement machines. The pavilion was home to various special events such as the successful annual art exhibition. A small section of the pier neck was open to the public, mainly housing an outdoor seating area for the bar. The main area of the pier neck was closed to the general public but was open for fishing, subject to the purchase of a permit. 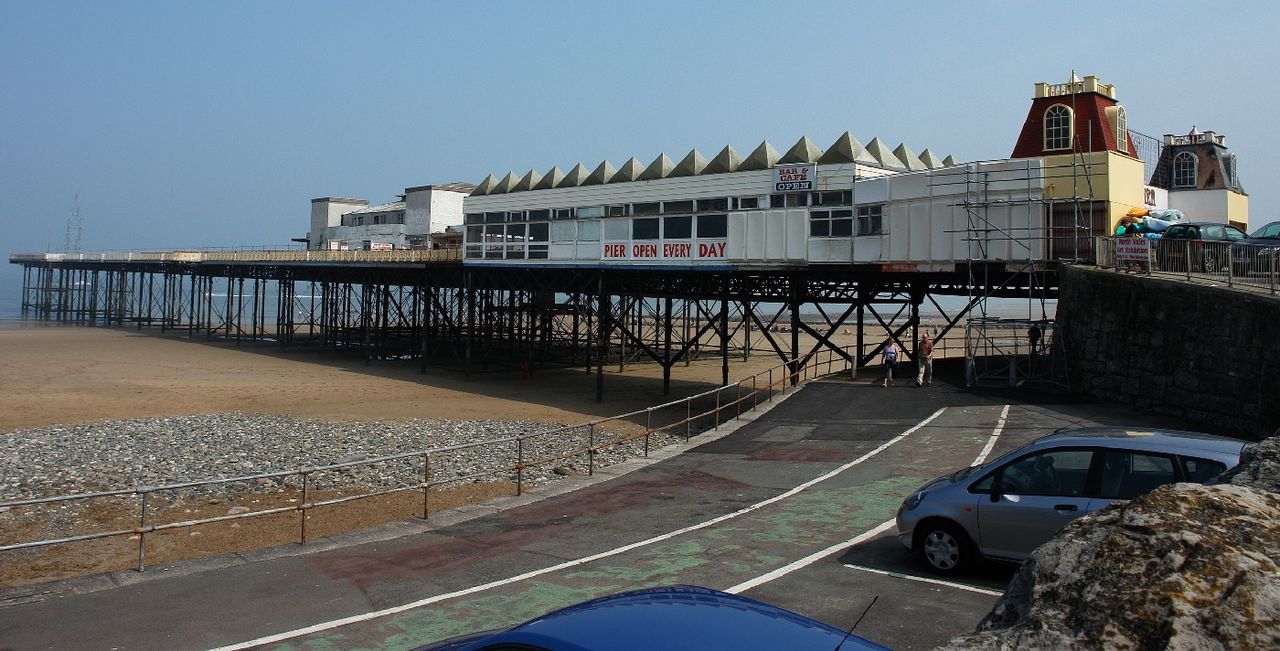 The Pier closed at the end of July 2008, as a result of a Bankruptcy Order made against the owner, Steve Hunt, by Conwy County Borough Council in respect of what they claimed were unpaid business rates. Hunt attempted to have the Bankruptcy Order annulled but with no success and the pier remained closed to the public. A documentary, entitled Pier Pressure, was shown on BBC2 Wales in December 2008; the film followed Steve Hunt’s attempts to rescue and restore the Victoria Pier over a one-year period.

In 2012 Conwy County Borough Council bought the Pier from the Receivers, Royce Peeling Green and intended to grant a lease to a local community group if they are successful. In late March 2012, Conwy Borough Council announced they would put in a request for lottery funding to be used to save the pier, however the request was denied and the structure still lay in a bad state, with fencing blocking people from being able to go under the pier for health and safety reasons. In 2013 the Pier regeneration had a new lease of life thanks to a local community group who formed a third sector company called Colwyn Bay Shore Thing. The company in partnership with the local authority were successful in a round 1 grant application to the Heritage Lottery fund however round 2 was denied in 2015. The Lottery fund stated that a large part of the denial was the council’s refusal to support or back the round 2 application on cost grounds. After the refusal the council announced they were going ahead with plans to delist and demolish the pier, however CADW the Welsh heritage organisation refused permission for the demolition.

On Wednesday, 1 February 2017, a section of the pier collapsed into the sea. Conwy Council later announced that with the agreement of the regeneration group the pier would be dismantled and stored away with a view of restoring it at a later date. Further collapse of the pier head occurred on Thursday, 23 February 2017, as a result of Storm Doris. Work began on dismantling dangerous sections of the pier began in March 2017, during which contractors accidentally set fire to part of the pier.

On 2 March 2017 a council meeting agreed to support a shortened pier and new pavilion put forward by the Colwyn Victoria Pier Trust. A seaward section of the pier that is dangerous, representing around half of its length, is due to be removed by the end of March 2017. The council then intends to apply for planning consent to remove the existing buildings and a further quarter of the piers length. The remaining length would be repaired with the trust applying for heritage lottery funding to build a learning centre and kiosks on the shortened pier.