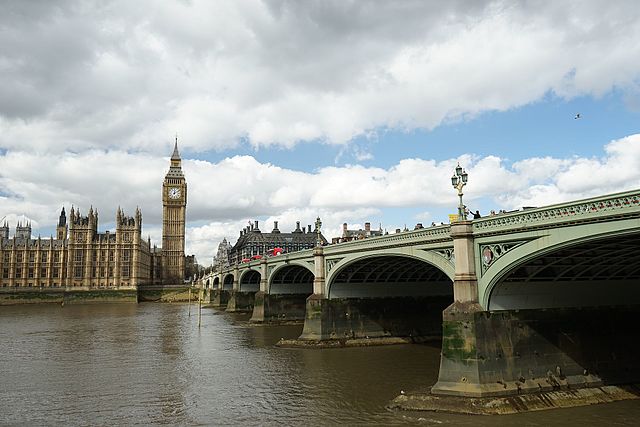 Westminster Bridge is a road and foot traffic bridge over the River Thames between Westminster, Middlesex bank, and Lambeth, Surrey bank in what is now Greater London, England.

For over 600 years, the nearest bridge to London Bridge was at Kingston. Proposals for a bridge at Westminster had been made as early as 1664. These were opposed by the Corporation of London and the watermen. Despite further opposition in 1722 and after a new timber bridge was built at Putney in 1729, the scheme received parliamentary approval in 1736. Financed by private capital, lotteries and grants, Westminster Bridge, designed by the Swiss architect Charles Labelye, was built between 1739-1750. It was only the second bridge crossing to be built across the Thames below Kingston when opened.

The City of London responded to Westminster Bridge by removing the buildings on London Bridge and widening it in 1760-63. The City also commenced work on the Blackfriars Bridge, which opened in 1769. Other bridges from that time include Kew Bridge (1759), Battersea Bridge (1773), and Richmond Bridge (1777).

The bridge was required to assist in the development of both South London and to give access directly to the south-coast ports for the north-bank expansion of the ”West End”, without traffic having to make its way through the already over-congested routes, of the Strand and New Oxford Street, into the City and across London Bridge. A group of by-pass roads were also developed to facilitate this, resulting in the complex junction at Elephant & Castle in Southwark, then part of Surrey.

By the mid 19th century it was subsiding badly and expensive to maintain. The current bridge was designed by Thomas Page and opened in 1862. With an overall length of 252 metres (826.8 ft) and a 26 metre width, it is a seven-arch wrought iron bridge which has Gothic detailing by Charles Barry (the architect of the Palace of Westminster). It is the only bridge over the Thames that spans seven arches and is the oldest bridge in the central area of the river Thames. When constructed it incorporated two 2 metre wide tramways, the tracks were removed in 1952.

In 2005 it underwent a complete refurbishment, which was finished in 2007. This sought to restore it to its former glory by replacing the iron fascias and repainting the whole bridge. The work was completed by contractors Interserve and engineers Tony Gee and Partners.

It links the Palace of Westminster on the west side of the river with County Hall and the London Eye on the east and was the finishing point during the early years of the London Marathon.

The next bridge downstream is Hungerford footbridge and upstream is Lambeth Bridge. The bridge was given Grade II* listed structure in 1981.

In the 2002 science fiction film 28 Days Later, the protagonist awakes from a coma to find London deserted, and walks over the Westminster Bridge whilst looking for people.

Westminster Bridge is the start and finish point for the Bridges Handicap Race, a traditional London running race.

In the British Science Fiction series Doctor Who, Westminster Bridge has been used for various location shots. It was used originally in 1964 in the serial The Dalek Invasion of Earth which depicts the structure as desolate and deserted. Several Daleks are seen gliding over the bridge and the adjoining Albert Embankment. The location was then re-used by the production team when the series was revived in 2005 where the ninth doctor and Rose Tyler run across the bridge in the episode Rose. It is also the name of a track in the Doctor Who Soundtrack album.

The bridge plays a prominent role in the Monty Python”s Flying Circus sketch “Nationwide” (“Hamlet”, Episode 43). Reporter John Dull (Graham Chapman) is sent to the bridge to find out if it is possible to sit in a chair and rest your legs whenever you want. A policeman (Michael Palin) confiscates his chair, saying it is stolen from a woman (Terry Jones in drag) who is standing across the street. Instead of giving the chair back to the woman, the policeman knocks her down and takes an identical chair from her and sits beside the reporter. He then takes different items from people walking or sitting nearby, finally breaking into a store (the crash of glass breaking is heard followed by the sound of an alarm) to get beer.

In the 2000 film 102 Dalmatians, Cruella de Vil goes mad after she hears the sound of Big Ben, and while on Westminster Bridge she sees everything white with black spots (the pattern of Dalmatians).

The decorated railings on the sides of Westminster bridge have an unusual feature. The sun shining through them projects a light image which some people have interpreted as a phallus.