Clacton Pier is a pier located in the seaside resort town of Clacton-on-Sea in England.

Clacton Pier, which opened on 27 July 1871 was officially the first building erected in the then-new resort of Clacton-on-Sea. A wooden structure 160 yards (150 m) in length and 4 yards (3.7 m) wide, the pier served as a landing point for goods and passengers, a docking point for steamships operated by the Woolwich Steam Packet Company, and a popular spot for promenading. By 1893, Clacton had become such a popular destination for day trippers that the pier was lengthened to 1180 ft (360m) and entertainment facilities, including a pavilion and a waiting room, were added to accommodate them. 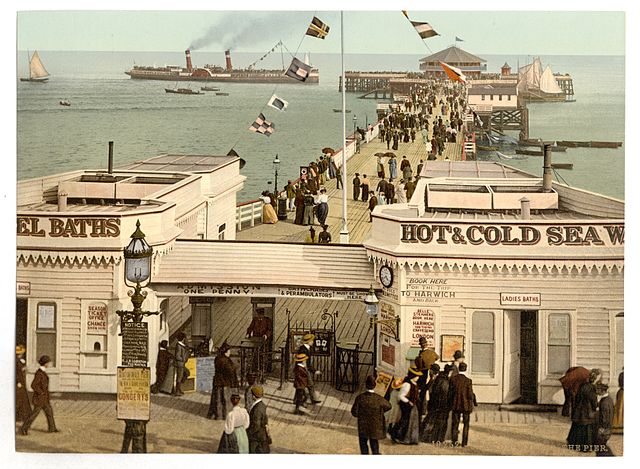 At the end of the First World War, the pier was bought by Ernest Kingsman, and it remained in the ownership of his family until 1971.

Kingsman added some major improvements to the pier including: a RNLI lifeboat house; a theatre called the Ocean Theatre; the classically named Blue Lagoon Dance Hall; the Crystal Casino; an open-air stage; an open-air swimming pool; and a roller coaster which was called Steel Stella.

During World War II, the Pier was breached to prevent it being used as a landing stage. A floating German mine also caused considerable damage.

From 1971 to 1985 dolphins and killer whales were kept and displayed on the pier at the site of the former open-air swimming pool.

In 1994, a local businessman and his family, the Harrisons, bought the pier. They embarked on an ambitious and successful modernisation project to attract 20th century day trippers. The pier emerged as a modern amusement park, virtually unique in the sense that there are rides as you first enter, with the rest dotted throughout the length of the pier.

In March 2009 the pier was purchased by the Clacton Pier Company, who installed a new focal point, a 50 ft helter-skelter. Originally built in 1949 and used in a travelling show, it was featured in a 2008/2009 Marks & Spencer television advert. The helter-skelter collapsed during the St Jude storm on 28 October 2013.