Birnbeck Pier is a pier situated on the Bristol Channel in Weston-super-Mare, North Somerset, England, approximately 18 miles (29 km) south west of Bristol. It is the only pier in the country which links the mainland to an island, linking to Birnbeck Island, a 1.2 hectares (3.0 acres) rocky island just to the west of Worlebury Hill. The grade II* listed pier was designed by Eugenius Birch and opened in 1867. The gothic toll house and pierhead buildings were designed by local architect Hans Price. The pier has been closed to the public since 1994 and is now on the Buildings at Risk Register.

During the second half of the 19th and early 20th centuries the pier was popular both with locals and tourists to the town. As a boarding point for steamers plying their trade in the Bristol Channel, it underwent various extensions and modifications over the years. During World War II the pier was commissioned as HMS Birnbeck by the Admiralty as part of the Directorate of Miscellaneous Weapons Development (DMWD) for research into new weapons. The pier reopened after the war, but the number of visitors and steamer passengers declined. The final excursion visited the pier in 1979.

Today, the pier is still home to the Weston-super-Mare Lifeboat Station. Since its closure, ownership has passed hands many times and it has been subject to a series of proposals for its redevelopment which have all proved fruitless. The pier remains in a largely derelict state. Part of the pier collapsed during storms on 30 December 2015.

The island was originally called Bearn Back, derived from the Old English words burn and bæc which means The spring brook island. It was pronounced by locals as Be-arn Back which has since become corrupted into the current name Birnbeck. The rock is limestone, giving rise to the geological term “Birnbeck Limestone Formation”.

Prior to the construction of the pier, Birnbeck Island could be accessed by a natural causeway at low tide. A proposal was made in 1845 to connect Birnbeck Island to the mainland at the western end of Worlebury Hill. Work commenced on a suspension bridge two years later under a design by James Dredge, architect of the Victoria Bridge in Bath. He patented the ‘taper principle’ based on using chains rather than cables, as is more common in suspension bridges. Dredge’s bridge design was considered “a very significant yet relatively short-lived phase in suspension bridge development”. During a strike by stonemasons, what little had been built was damaged during storm, bringing about the end to the suspension bridge scheme. 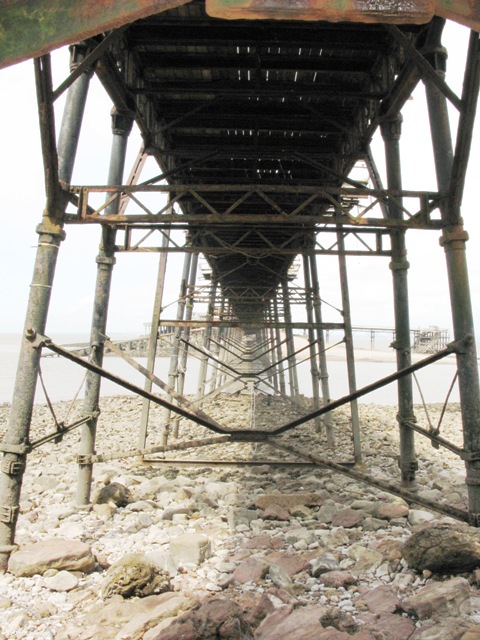 In 1864, a new proposal was made to build a pier across to the island, funded by 2,000 shares which raised £20,000. Cecil Hugh Smyth Pigott, the four-year-old son of the lord of the manor, laid the foundation stone on 28 October 1864 when a public holiday was declared in the town and a celebratory dinner was held in the Town Hall.

The main pier was originally 1,150 feet (351 m) long, and it is 20 feet (6 m) wide with a cantilever construction. However the low water jetty was damaged in a storm in 1903, rebuilt in 1909 and finally dismantled in 1923 meaning that the pier is now 1,040 feet (317 m) long, Due to architectural features such as abutments at either end of the pier, the pier resembles a bridge more than other pleasure piers. Fifteen groups of piles support a continuous lattice girder, each set comprising four piles screwed into the river bed at an angle with an X-brace between each adjacent pair. The fitting of screw blades to iron piles, as opposed to the then accepted wooden pile, created a deeper and far more resilient base support. This was one of the innovations brought by Eugenius Birch which have enabled many of the piers he designed to survive. There were problems with oscillations in the structure when bands marched on the pier, both on the opening day and again in 1886. As a result, further horizontal cross braces were added to the piles, and a law was passed banning marching on the pier. The gothic toll house and pierhead buildings were designed by local architect Hans Price.

To allow steamers to bring day trippers to Weston-super-Mare from ports on both the English and Welsh side of the Bristol Channel, a landing jetty was extended on the west side of the island. The Severn Estuary has the second highest tidal range in the world second only to the Bay of Fundy in Eastern Canada. The estuary’s funnel shape, its tidal range, and the underlying geology of rock, gravel and sand, produce strong tidal streams and high turbidity, giving the water a notably brown colouration. The tidal range means that the legs of the pier are largely exposed at low tide and hidden at high tide. 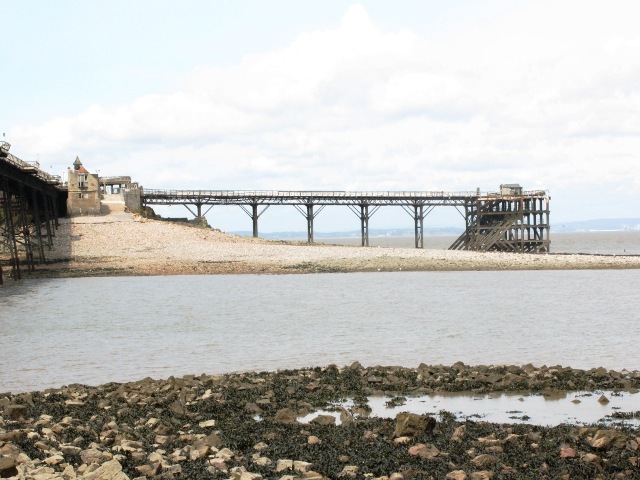 When the pier opened on 5 June 1867, again under Cecil Hugh Smyth Pigott, many of the people of Weston-super-Mare were given a holiday and a banquet was held in the Town Hall. The toll to walk on the pier was 1d (an old penny), but this was quickly raised to 2d, which was the maximum fee permitted by the General Pier and Harbour Act 1861. 120,000 people paid the toll in the first three months. A tramway system was installed to carry the luggage of passengers arriving at the pier.

A new wooden northern jetty was added in 1872 which allowed the removal of the original western landing place. Another jetty was built on the south west corner in 1898 which reached deep water even at low tide, thus allowing steamers to use the pier at all states of the tide. This was damaged in a gale in 1903, and although it was rebuilt in 1909, it closed in 1916 and was dismantled in 1923. The northern jetty had also been damaged in the 1903 storm but was replaced by the present steel structure in 1905.
A second pier, known as the “Grand Pier“, was opened in the centre of Weston-super-Mare in 1904. Although it had the capacity to accommodate for steamers, it was seldom used due to difficult currents around the structure. An electric tram along the seafront ran to and from the pier approach road at Birnbeck.

Many visitors arriving on the steamers never left the pier and Birnbeck Island which between them housed the cafe, pavilion, amusements and funfair. These were destroyed by fire on 26 December 1897 and replaced by the present buildings, although these have been altered over the years. The attractions included Mutoscopes, a shooting gallery, merry-go-round, park swings, a theatre of wonders and a licensed bar. In 1891 a telephone was installed only six months after the first one was installed in the town. In 1909, the amusement area was expanded by an extension on iron supports along the south side of the island. However, this was not built to the proper specifications so was demolished in 1912; a larger concrete platform was added in its place in 1932.

The pier was taken over by the Admiralty in 1941 as an outpost of the Directorate of Miscellaneous Weapons Development (DMWD). It was commissioned as HMS Birnbeck and was used for secret weapons development and storage with testing. The “Bouncing bomb” was tested at the Brean Down Fort on the opposite side of Weston Bay. After the war, the pier resumed its role as a tourist attraction, but business declined due to competition from the Grand Pier which opened its amusement arcades in 1946.

In 1962 the Birnbeck Pier Company sold the pier to P & A Campbell, the steamer operators. After the withdrawal of their ships it was sold to John Critchley, who redeveloped it as a “Victorian pleasure centre” which even had special permission to issue its own currency to visitors. There have since been several proposals to make the pier a commercial success again, including converting it into a hotel, casino, residential use, or the centre of a marina.

The most successful steamer company serving the Bristol Channel was P & A Campbell’s “White Funnel” fleet. Their operations were suspended during the Second World War, after which the number of passengers decreased with the availability of cheap foreign holidays and the opening of the Severn Bridge in the 1960s. Regular ferries ceased serving Birnbeck in 1971 and the final excursion was made 19 October 1979. The pleasure “steamers” PS Waverley and MV Balmoral still operate in the Bristol Channel, but any calls at Weston are made by a connecting tender from Knightstone Harbour. 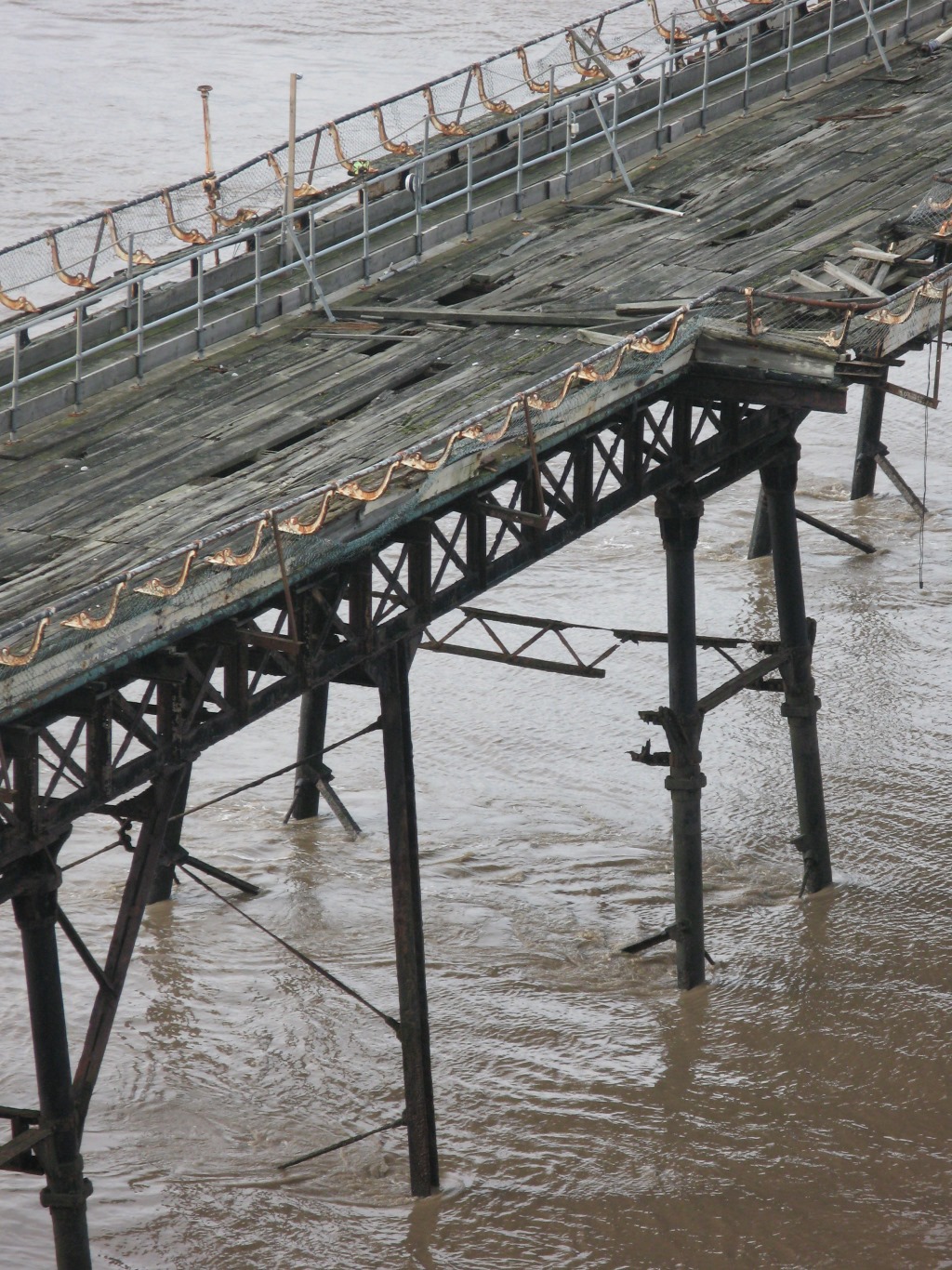 In 1984, £1 million of damage was caused to the pier by drifting equipment during engineering work in Sand Bay, to the north of the pier. The damage was quickly repaired, despite fears that Birnbeck might become like nearby Clevedon Pier, which at the time was severed by a collapsed span. The pier was again badly damaged by storms in 1990 and was closed for safety reasons in 1994. Daily trips during the summer months to and from Cardiff, Clevedon, and Penarth were suspended indefinitely. Due to the decline, English Heritage has placed it on the Heritage at Risk register. In 1999, the lifeboat station installed a walkway across the pier to allow them safe access to the island, at a cost of £20,000.

In 2006 the pier was sold to Manchester company Urban Splash. The new owners launched a competition in August 2007, inviting people to submit ideas for the regeneration of the pier and island. At the time, the repair work required was estimated at £4 million. There were 95 entries for the competition from around the world, whittled down to a shortlist of six. The winner of the design competition, Levitate Architecture and Design Studio Ltd, was announced in March 2008. The winning design included a dozen luxury apartments and a 50-room hotel. 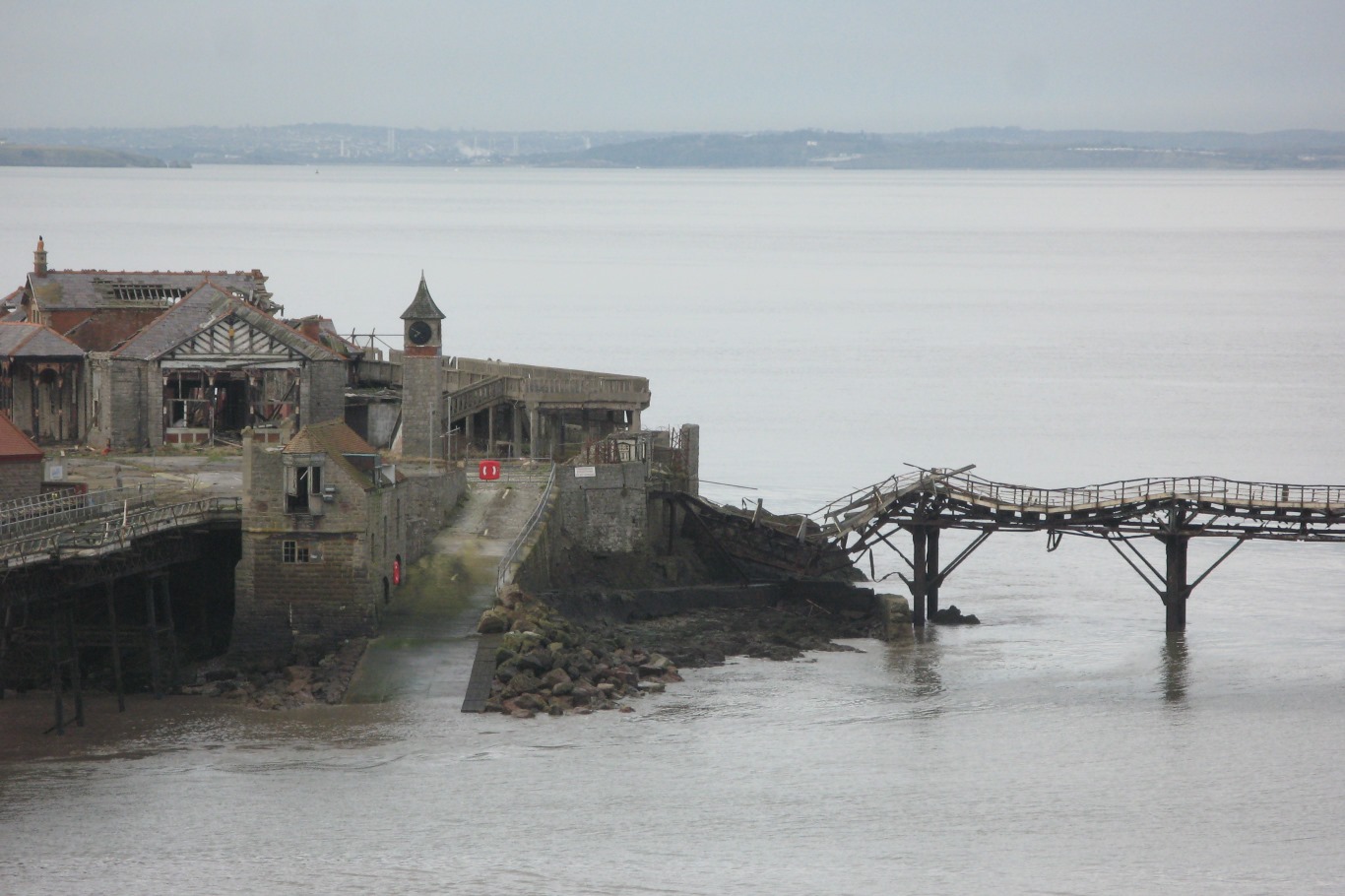 In August 2008, the Royal Institute of British Architects (Riba) announced a campaign to redesign the buildings on the island, and six designs were submitted. One of the designs removed the existing buildings and piers to replace them with walking paths, and added a large curvilinear concrete building to the island. The design called for many windows in the building to create a large panorama of the surrounding seascape. In September 2010 Urban Splash placed the pier up for sale, citing a downfall in business caused by the recession as their reason.

In September 2011 Wahid Samady and Michael Ross were reported to have bought Birnbeck Pier for an undisclosed sum; Samady had also been awarded planning permission for a new development at the nearby Royal Pier Hotel site, just yards from the pier. In August 2012 further reports suggests the sale had not proceeded and that Urban Splash were still the owners. It was bought by CNM Estates of which Wahid Samady is Chairman and Michael Ross a Director in 2014. In 2015 the Victorian Society included the pier on its list of the ten most endangered buildings.

Part of the north pier collapsed during storms on 30 December 2015.