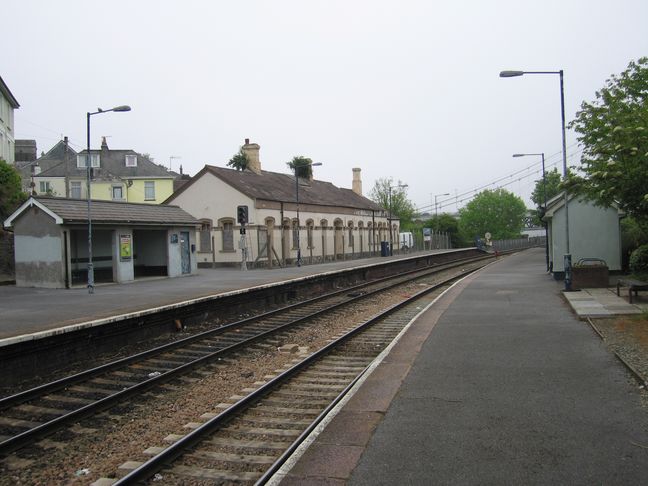 Saltash railway station serves the town of Saltash in Cornwall, United Kingdom. It is situated on the south side of the town between the Royal Albert Bridge over the River Tamar and Coombe Viaduct which spans a small tributary of the same river. The station is currently operated by First Great Western.

The platform nearest the town is served by trains to Plymouth; both platforms have step-free access.

The station opened with the Cornwall Railway on 4 May 1859. It was described at the time as being “at the head of that town. It consists of an arrival and departure station, both being stone buildings, and possessing all requisite offices for the accommodation of the traffic. New and convenient approaches are likely to be made to that station by the corporation and the owners of adjoining property, which will prove a great public benefit.”

To counter competition from electric trams, the Great Western Railway opened several small station in Plymouth and began to operate an intensive service of local trains between Saltash, Plymouth and Plympton in July 1904. The services were vastly reduced after the Tamar road bridge opened in 1961.

It had been hoped to restore the buildings as a visitor centre for the Royal Albert Bridge, but they have now been sold to a property developer.

Saltash is served by about half the First Great Western trains on the Cornish Main Line between Penzance and Plymouth, including a few that run through to London Paddington station. One of the local services to Penzance each Saturday starts at London Waterloo station and is operated by South West Trains.