Caroline Mary Aherne (24 December 1963 – 2 July 2016) was an English comedian and BAFTA-winning writer and actress, best known for performing as the acerbic chat show host Mrs Merton, roles in the The Fast Show, and as lead in the The Royle Family, a show that she co-wrote.

Aherne was born in Ealing, London, into the family of an Irish railway worker, and from the age of two was raised in Wythenshawe, Manchester. Like her brother, Patrick, Aherne suffered from retinoblastoma in childhood, which left her partially sighted in one eye. She attended the Hollies Convent Grammar School in West Didsbury and then studied drama at Liverpool Polytechnic.

Aherne began performing on the Manchester comedy circuit as characters such as Mitzi Goldberg, lead singer of the comedy country and western act the Mitzi Goldberg Experience, and Sister Mary Immaculate, an Irish nun. She developed her Mrs Merton character with Frank Sidebottom for his show on Piccadilly Radio, where she worked as a receptionist. Aherne’s first TV appearances were as Mrs Merton in a semi-regular spot on the Granada TV discussion show “Upfront” in 1990. She made brief appearances in The Smell of Reeves and Mortimer in 1993 and alongside Steve Coogan and John Thomson in a Granada TV pilot entitled The Dead Good Shows.

She rose to prominence in 1994 as her created character Mrs Merton on the mock chat show The Mrs Merton Show under her married name of Caroline Hook. The guests were real-life celebrities, not actors, who found themselves the subject of outrageous faux naïve questions – in one memorable example the wife of magician Paul Daniels, Debbie McGee, was asked “So, what first attracted you to the millionaire Paul Daniels?” Another episode featured comedian Bernard Manning and actor Richard Wilson. Manning clashed with Wilson and Aherne, although he acknowledged that One Foot in the Grave was funny. The series ran in various formats from 1994 to 1997, winning a BAFTA for Best Chat Show in 1997. The success of the show was partly attributed to the “round vowel sounds of the North West accent” which “naturally sound safe and unthreatening” and which allowed the character “to ask the most outrageous, below-the-belt questions of her guest stars”. The Mrs Merton character was given a sitcom, Mrs Merton and Malcolm, which depicted her home life with her “mummy’s boy” son (played by co-writer Craig Cash). This aspect of Malcolm’s character was exaggerated to the point that many complained the series ridiculed those with learning difficulties. Mrs Merton and Malcolm lasted one series, and was released on DVD in 2008.

Between 1994 and 1997 she appeared in and wrote for the BBC comedy series The Fast Show. One of her most notable characters was the “Chanel 9 Neus” meteorologist Poula Fisch, who invariably reported a temperature for all locations of 45 °C (113 °F) while exclaiming “Scorchio!” with apparent surprise. Other notable characters included the endlessly chattering northern Renée, wife of submissive husband Roy, and supermarket Checkout Girl who, by way of conversation, would comment on each item a customer had bought. 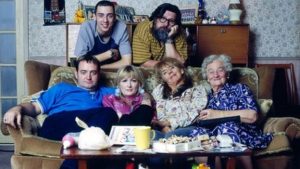 Her most popular creation is the situation comedy The Royle Family, which she co-created and wrote with Cash, and directed in its third series. The programme ran for three series from 1998 to 2000. Aherne starred alongside Ricky Tomlinson and Sue Johnston, as their daughter Denise Royle. The show was a commercial and critical success, and ran for three series of six episodes as well as three one-offs. After a 2000 spoof documentary with Cash entitled Back Passage to India, Aherne said The Royle Family would end in December 2000 after a Christmas special, and that she would not appear on television again, although she would continue to write. Aherne received BAFTAs for Best Sitcom in 2000 and 2007, and she won the BAFTA for Best Comedy Performance in 2000. She was nominated for directing in 2001.

Following a disagreement with Cash, Aherne moved to Sydney, retreating from the press. She wrote Dossa and Joe which was screened on BBC 2 in 2002. Although critics applauded it, the show did not attract viewers and did not return for a second series. Returning to Britain, she began work on another sitcom with Cash but pulled out, after which Cash wrote Early Doors with Phil Mealey.

After Dossa and Joe, Aherne avoided media attention. When The Fast Show was featured on the BBC One show Comedy Connections, Aherne was the only cast member not interviewed. In April 2006, the BBC said Aherne and Cash were developing a script for a one-off special of The Royle Family. The Royle Family: The Queen of Sheba was broadcast on 29 October 2006, to an audience of 7.8 million. Aherne subsequently made few TV appearances. On 14 October 2008 she was in the BBC comedy drama written by Cash and Phil Mealey, Sunshine as a barmaid. She appeared in The Royle Family, The New Sofa on Christmas Day 2008. In 2009, she appeared in a Royle Family special for Comic Relief as well as another Christmas Day special of The Royle Family entitled The Golden Eggcup. She co-wrote the ITV comedy-drama The Fattest Man in Britain, which was broadcast in December 2009.

In November 2010, Aherne appeared, in the special The Royle Family: Behind the Sofa shown on Gold, featuring clips of The Royle Family and interviews with Aherne, Cash and the cast, which was followed by another Christmas Day special, Joe’s Cracker. She narrated a BBC1 documentary series Pound Shop Wars broadcast in November 2012. She also appeared in The Fast Show internet specials, sponsored by the lager brand Fosters, which reunited most of the original principal cast; only Mark Williams was unable to participate.

From 2013 she narrated the Channel 4 programme Gogglebox. In 2014 Aherne narrated the four-part second series of Pound Shop Wars, which was broadcast on BBC One and in 2015 she made a brief cameo in episode three of Sky 1’s After Hours, reuniting her with her old writing partner Craig Cash, who directed the series.

Aherne was married to Peter Hook of the rock band New Order from 1994 until 1997. During their marriage he appeared in her TV series The Mrs Merton Show as leader of Hooky & the Boys, the show’s house band.

During the 1990s Aherne suffered from depression and alcoholism, which she blamed on the pressures of celebrity. In 1998 she attempted suicide and was treated at the Priory. She suffered from bladder cancer and from a rare cancer of the retina. In 2014 she embarked on a programme of treatment for lung cancer.

In June 2014 Aherne appeared in Manchester at the launch of the Macmillan Cancer Improvement Partnership (MCIP), a £3.4m scheme to co-ordinate cancer care in the city. She spoke about how a sense of humour had helped her cope with the disease. In 2016, Aherne became the voice behind the UK government’s “One You” health campaign, to persuade people to cut down on cigarettes and alcohol.

On 2 July 2016, Aherne died at her home in Timperley at the age of 52. Aherne had told family and close friends in May that she was terminally ill.

Tributes were paid by fellow Royle Family actors Sue Johnston, Ricky Tomlinson and Ralf Little, as well as by Matt Lucas, David Baddiel, David Walliams and Lord Hall, the Director-General of the BBC.