Severn crossing is a term used to refer to the two motorway crossings over the River Severn estuary between England and Wales.

The two crossings are:

The first motorway suspension bridge was inaugurated on 8 September 1966, and the newer cable-stayed bridge, a few miles to the south, was inaugurated on 5 June 1996. The Second Severn Crossing marks the upper limit of the Severn Estuary.

The two Severn crossings are regarded as the main crossing points from England into South Wales. Prior to 1966 road traffic between the southern counties of Wales and the southern counties of England either had to travel via Gloucester or take the Aust Ferry, which ran roughly along the line of the Severn Bridge, from Old Passage near Aust to Beachley. The ferry ramps at Old Passage and Beachley are still visible. Tolls are collected on both crossings from vehicles travelling in a westward direction only. 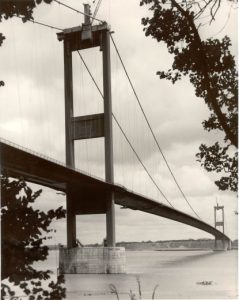 Severn Bridge The Severn Bridge is a suspension bridge spanning the River Severn between South Gloucestershire, just north of Bristol, England, and Monmouthshire in South Wales, via Beachley, a peninsula between the River Severn and River Wye estuary. It is the original Severn road crossing between England and Wales and took five years to construct at a cost of £8 million. It replaced the Aust ferry.

The bridge was opened on 8 September 1966, by Queen Elizabeth II, who hailed it as the dawn of a new economic era for South Wales. The bridge was granted Grade I listed status in 1998.

The first proposal for a bridge across the Severn, approximately in the same location as that eventually constructed, was in 1824 by Thomas Telford, who had been asked to advise on how to improve mail coach  services between London and Wales. No action was taken, and over the next few decades the railways became the dominant mode of long-distance travel, with the Severn Railway Bridge at Sharpness being opened in 1879 and the main line Severn Tunnel  in 1886. However, the growth of road traffic in the early 20th century led to further calls for improvements, and in the early 1920s Chepstow Urban District Council convened a meeting of neighbouring local authorities to consider a Severn crossing to ease congestion and delays on the A48 passing through the town. In 1935 Gloucestershire and Monmouthshire County Councils  jointly promoted a Parliamentary Bill to obtain powers to build the bridge over the estuary, with 75% of costs to be met by the Ministry of Transport from the Road Fund. However, the Bill was rejected by Parliament after opposition from the Great Western Railway Company.

After World War II, plans began to be made for a nationally funded network of trunk roads, including a Severn Bridge, for which the contract was awarded to Mott, Hay and Anderson, with Freeman Fox and Partners. The public inquiry into the scheme was held on 24 September 1946 at Bristol university. However, because Government funding was prioritised for the similar Forth Road Bridge (opened in 1964), construction of the Severn Bridge was not started until 1961: the UK government announced in 1962 that construction costs would be ‘recovered’ by means of a toll of 2s 6d (GBP 0.125) on all vehicle crossings, though walking or cycling across the bridge would be charge-free. The substructure was completed by contractors John Howard and Co in 1963. The superstructure contract was awarded to Associated Bridge Builders Ltd in 1963, and completed in 1966. In parallel, the Wye Bridge was built by Cleveland Bridge & Engineering Company. 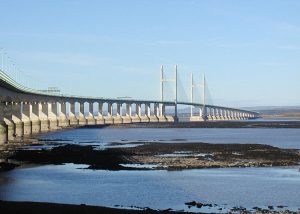 Its location is further to the south than the old bridge and being more in line with the landward sides of the M4 motorway, is a shorter journey when travelling between England and South Wales. The junctions at each end are designed for most traffic to use this crossing – to use the old Severn Bridge crossing one has to leave the M4 and join the M48 motorway either at Aust or near Magor. The new crossing carries more traffic than the Severn Bridge, which is still in use. It is wider than the Severn Bridge, having three lanes and hard shoulder each way, compared to the two lanes, cycle path and footpath of the original crossing. The path taken by the bridge is close to that of the Severn Tunnel which has carried the railway line beneath the river since 1886.

On 6 February 2009, the bridge was closed by weather for the first time since its opening after three vehicles were struck by falling ice, damaging windscreens. Bad weather, and again falling ice, repeated this in December 2009. 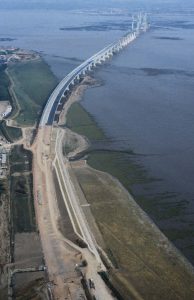 The crossing is 3.2 miles (5.1 km) long, consisting of a single central navigation span over the “Shoots” channel and approach viaducts  on either side. The Shoots channel is the deepest section along the width of the Severn Estuary, and a longer span was required to ease the passage of shipping under this section. The central bridge section, called the Shoots Bridge, is of cable-stayed design and the central span (between the bridge pylons) is 499 yards (456.3 m) in length. The approach viaducts are of a segmental bridge design. Its Welsh end is near Sudbrook, Monmouthshire and its English end at Severn Beach in South Gloucestershire. The crossing forms a gentle S shape and near the English side crosses over the top of the Severn railway tunnel.

The sides of the bridge are fitted with special railings to reduce lateral wind loads coming from the Severn Estuary onto the traffic and this has reduced the number of times that speed restrictions have been needed. The overall design of the new crossing makes it more resistant to high winds than the old Severn Bridge.

Sub-assemblies for the bridge were constructed onshore and then shifted by a large tracked vehicle (similar to that used to move the Apollo and Space Shuttle at Cape Kennedy) onto a barge, prior to being floated out on the high tide to the appropriate site. The 37 bridge pier foundations on the approach viaducts are 107.3 yards (98.1 m) apart, and consist of concrete pneumatic caissons  weighing 37 tonnes, which were sunk into the mud of the estuary. The decking consists of 3.8 yards (3.5 m) post stressed match cast sections, weighing 200 tonnes each.

The cable stayed section of the crossing is over 984 yards (899.8 m) long, consisting of a 38 yards (35 m) wide deck made from steel plate girders with a composite reinforced concrete slab. These were prefabricated on shore and put in place using balanced cantilever methods. There are two 489 feet (149 m) high twin leg, reinforced and pre-stressed concrete pylons carrying 240 cables which support the bridge deck. Cable vibrations were experienced during construction and secondary cables were added to eliminate this. To avoid detracting from the aesthetics of the primary cables, the secondary cables are very slender and are not very noticeable.