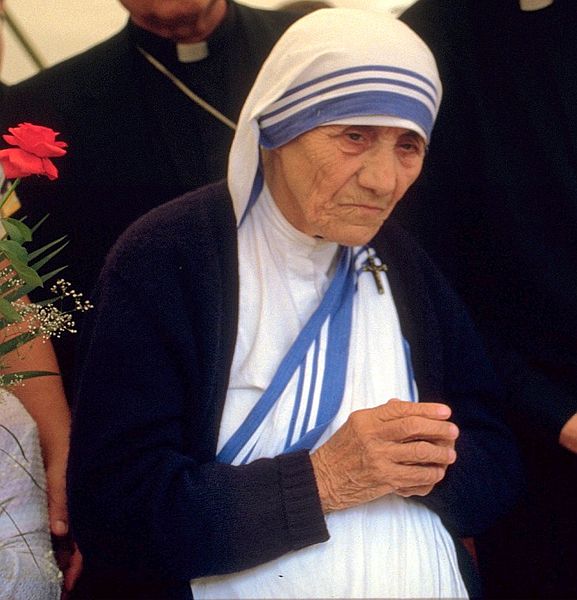 Mother Teresa was born as Agnes Gonxha Bojaxhiu, on August 27, 1910, the map of the heavens at her birth has the following stellar signature: Sagittarius, Virgo and Libra. Her Sagittarius ascendant makes her attuned to philosophy, religion and she has a deep longing to understand God. Several of the planets were in Virgo, the sign of service, and her Midheaven was in Libra, the sign of equality and peace. Throughout Mother Teresa’s life she expressed the best of these signs and, which the energies of Pluto, which rules fate, and Neptune, the planet of mysticism, which actively influenced her life as they transit around her horoscope, she was able to come up with a new brand of practical spirituality.

She took the vows of chastity, poverty and obedience, made herself pure and fit for divine communication. Later in her life, as Mother Teresa, she regarded her life and works as an expression of God’s love on earth. When she was eighteen, Neptune entered her 9th house-the area of education, higher learning and yearning to be with God. There was a call to be in union with the higher forces of the universe and she heeded the call. She left her home in Skopje, Yugoslavia and became a nun in Dublin, Ireland. She was changed forever; she came to be known as “Sister Teresa.” Her life was transformed as she dedicated it to doing God’s will. The order she joined ran convent schools in India. She later went to India to teach and eventually adopted it as her home and the base for her saintly work.

On September 10, 1948, while on the train heading to a retreat, she had a remarkable spiritual experience. There was another message form God, instructing her to leave the convent and to help and express God’s love to those who are poor, suffering and downtrodden. In this year, she started her special mission; she left the convent to seek the poor. She attracted 12 followers who were very devoted to her cause. They sought the most miserable of society and lived with them. Early in the existence of their order they endured abuse and humiliation but they persevered. In 1950, the Vatican established the Missionaries of Charity and Sister Teresa became Mother Teresa. Unlike other missionary orders, they took and additional vow- a life of dedication to the care of the poor and the needy.

In 1952, the House for the Dying was opened, caring for the helpless and guiding them to die in dignity. In 1957, they started to work with the outcast of society-the lepers. Wherever there was a calamity, missionaries from her order were present, giving moral support and helping raise funds for the people in distress. Mother Teresa’s strong dedication has won her many admirers and supporters worldwide. By her selfless example she has proven that despite economic issues that divide people, human beings are the same-they share the same pain and sorrow. Her work has transcended national and religious boundaries.

She has won the support of world leaders and other benefactors form different backgrounds, hence, she did not have to worry about the source of funding for her projects. In 1985, then US President Ronald Reagan honored her with the Medal of Freedom. In 1996 a poll was made and she was voted second to Princess Diana as the World’s Most Caring Individuals.

Mother Teresa has helped millions of people who were suffering and have inspired the rich and the poor alike into another way of compassionate living. Some individuals were born to embody a universal principle that if more people would emulate would lead to a more peaceful and spiritual planet; Mother Teresa was such a light, she pointed us a way to be closer to God, through the path of service.